The Cape Cod National Seashore beaches are spectacular in their beauty and have a really wild feel.

Coast Guard Beach is one of the best surfing beaches on Cape Cod and is where I spend most of my time. Further south, the Nauset inlet current forms the sand bars off shore which gives rise to the big waves.

It is often recognized as one of the top 10 on various lists of America's best beaches and because of this, is a very popular (crowded) swimming and sunbathing beach. 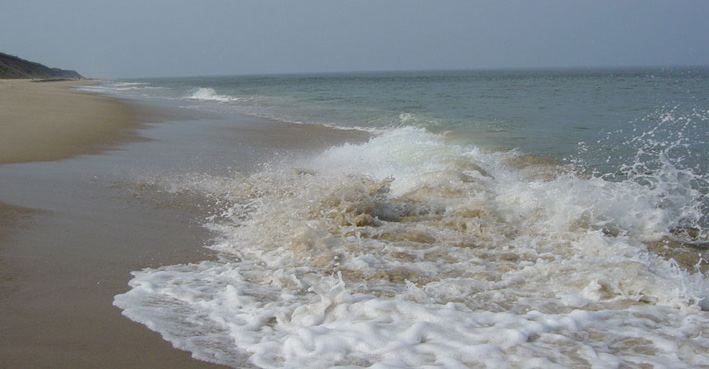 Cape Cod National Seashore beaches have entrance fees which are collected from late June through early September when lifeguards are on duty, and on weekends/holidays from Memorial Day to the end of September. $15 is the daily vehicle fee, $3 for pedestrians, bicyclists and motorcycles. $45 purchases a pass good for a calendar year fee season.

Cape Cod National Seashore beach passes are usually available at visitor centers starting Memorial Day, and at fee booths when they are open. The Interagency Annual pass ($80) may be purchased at Salt Pond Visitor Center (daily April 15 through October 31, and on weekends November 1 through March) and at Province Lands Visitor Center (daily Memorial Day weekend through Labor Day weekend).

On November 9, 1620, the famous Mayflower, made her landfall in the New World at what is now Coast Guard Beach. (My favourite Cape Cod National Seashore beach) Captain Jones, knowing that his Pilgrim passengers were supposed to settle in northern Virginia, headed southeastward.

Pollock Rip (really bad shoals along the CCNS), managed to snag his ship, despite all preventative measures. It was thanks only to a change in wind direction -- that untangled the ship -- which allowed this famous voyage to continue.

"The Great Beach," so named by Henry David Thoreau, starts here as well.

From mid-June to Labor Day, the parking area at the top of the hill is restricted to park staff and vehicles with disabled permits. Access is provided by shuttle bus from the Little Creek parking area (across from the Doane Area).

Although the parking lot at Coast Guard Beach is open the remainder of the year, parking is limited so get there early or come late afternoon. There are seasonal restrooms and a wheelchair-accessible ramp way to the beach. This Cape Cod National Seashore beach attracts a lot of surfers too.

Nauset Marsh is located behind the former Coast Guard Station. You can get to it from a pathway that leads to the bicycle trail bridge. Here, one can see shorebirds picking through the tidal flats in the warmer months and observe salt marsh grass systems.

Nauset Spit offers the opportunity to walk directly onto a barrier island and is a great place for bird watching. The inlet into Nauset Marsh is at the southern end of Nauset Spit.

World-renowned nature writer, Henry Beston, wrote "The Outermost House" in 1928, from his cottage located here on this Cape Cod National Seashore beach. This cottage is about two miles south.

The book describes life on the outer beach throughout the four seasons of the year and is a must read for everyone.

The house was designed by Henry Beston in 1925 and he took great care with every detail because he intended his house to sit on the dune, solid as a good ship. The tiny house was called the Fo'c'sle by Henry Beston, and was 21 ft. long by 16 ft. wide and only had 2 rooms -- a main room and a bedroom. There were windows on all four sides, giving it wonderful views of the entire area, and a little porch along the front.

Henry Beston gave the property to the Massachusetts Audubon Society in 1959. It was occupied in summer by Audubon members who enjoyed their solitude as much as Henry Beston did.

Unfortunately, the sea destroyed the cottage during a ferocious northeasterly storm in the winter of 1978.

Nesting plovers and terns are plentiful in this area in the early spring to early summer. Plovers are listed as threatened under the Endangered Species Act.

Seals can often be sighted at the end of Nauset Spit during the winter months. Generally these are harbor seals.

At low tide, they can sometimes be seen "hauling out" onto the marsh. During the summer, they usually are seen swimming just beyond the wave breaks.

Once when I was surfing, I was lying on my board in calm waters and a seal popped his head out of the water right beside me. I was so startled that I screamed and his eyes got really wide and he ducked back down. I don't think he realized I was there!

The outer beach, or "backside," of Cape Cod has been the notorious graveyard for more than 3,000 ships since the wreck of the Sparrowhawk in 1626. Once in a while, you can find some long lost debris that washes up onto some of the Cape Cod National Seashore beaches, dislodged from storms.

Because of the many lives and livelihoods lost, the Massachusetts Humane Society was formed in 1786. It was the first organization in the nation devoted to the rescue and assistance of shipwrecked mariners.

The Humane Society established shelter huts along the coast and later built lifeboat stations where surfboats, line-throwing guns, and other lifesaving gear were stored for the use of volunteer crews in emergencies.

In 1848, the Congress gave funds for the first time to construct, equip and maintain similar stations in New Jersey.

From 1848 until 1872, Congress provided the money to build more stations along the eastern seaboard and the Great Lakes. The stations in Massachusetts continued to be administered by the Massachusetts Humane Society, but the federal government subsidized its operation.

The continued frequent loss of life along the nation's shores led Congress, in 1871-1872, to reorganize the Life Saving Service, and placed it on a full-time professional basis. The construction and manning of nine stations on the "backside" of Cape Cod was provided for in the Federal budget of 1871.

One of the original nine stations was constructed at Nauset. It was located about 350 yards southeast of the present building.

Shoreline erosion forced the construction of a new station. The old station remained in service until 1937, when it was replaced by the present structure. The present building was in service as a Coast Guard Station until 1958.

This Cape Cod National Seashore beach joins onto Coast Guard's north end. There is a separate parking lot for it down the road (Brackett Road), and the fees are the same as Coast Guard.

Nauset Light Beach consists of a broad, sandy beach that is contained by a steep glacial scarp behind it. During winter months, the beach profile is considerably lowered, sometimes exposing features such as the brick foundation of one of the earlier Three Sisters lighthouses. The current ones are across the street.

No trolley at this Cape Cod National Seashore beach -- just park, and walk down the steep steps that follow the cliff down to the beach.

It is narrower here than further south. Also, in late afternoon, the dunes block the sun as it starts to get lower in the sky.

I don't like this Cape Cod National Seashore beach as much as Coast Guard but it does have less crowds because of the small parking lot. The lot fills up fast in the morning, often staying that way all day.

This is where I do a lot of photography because of the breath taking views.

As you can see by the below picture, the cliffs are steep and are VERY susceptible to erosion. 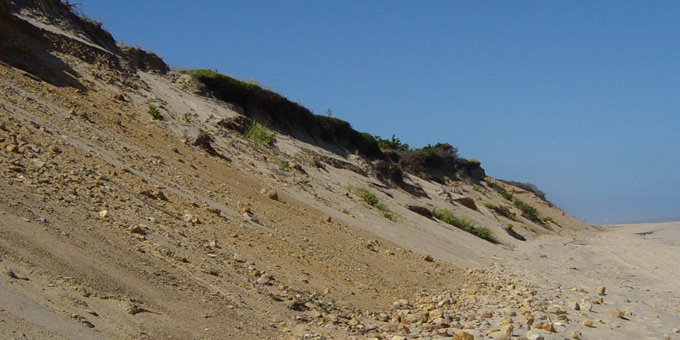 The Marconi Area obtained its name from the famous Italian inventor, Marconi. From this site, Marconi successfully completed the first transatlantic wireless communication between the U.S. and England in 1903.

Here, the outer beach is famous for its steep, forty-foot sand cliff (or scarp).

Swimmers and beach walkers feel a sense of solitude here because the scarp and ocean provide an unbroken, pristine natural scene in all directions. This is the Cape Cod National Seashore beach pictured in your mind.

The uplands above the beach, gradually slope westward and provide a graceful lookout of both the bay and sea horizons of this portion of the Cape.

A platform above the Marconi station site enhances this view and offers vistas southward to Eastham, and northward to Truro.

Marconi chose this site because of the barrenness of this elevated land overlooking the ocean. The government chose the area for similar reasons during World War II, and established Camp Wellfleet at this site to serve as an artillery training facility.

The military camp eventually outlived its need, and the property was transferred to the National Park Service with the creation of Cape Cod National Seashore.

Follow route 6 north, 6 miles from Salt Pond Visitor's Center until you get to the turn off in Wellfleet.

A long road will take you to a large parking lot and stairs down to the beach. Restrooms and a bathhouse are here also.

So many ships have piled up on the hidden sand bars off the coast between Chatham and Provincetown that those forty miles of sea have been called an "ocean graveyard." Between Truro and Wellfleet alone, there have been more than 1,000 wrecks.

From the Head of the Meadow Beach at North Truro, the wreck of the Frances, which was sunk in a December gale in 1872, may still be seen at low tide.

This lifeguard protected beach has limited restroom facilities available in summer only.

To get to this Cape Cod National Seashore beach, drive north on Route 6, proceed .25 mile north from Cape Cod Light/Highland Road exit. Look for the brown and white Head of the Meadow Beach sign on the right. Turn right and proceed two miles to the beach and bike trail head. 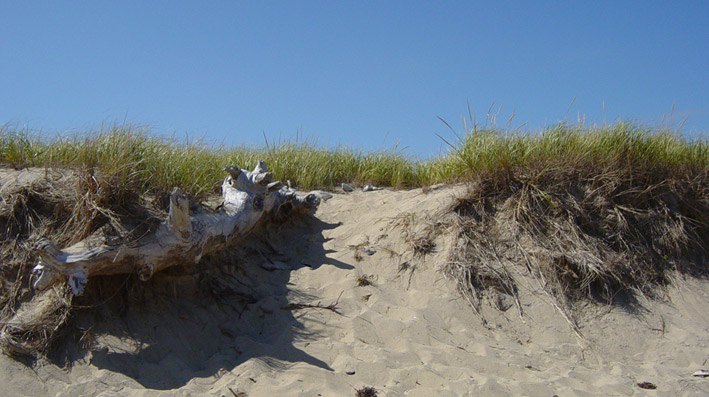 Once you get to Provincetown, make a stop at the Province Lands Visitor's Center (on Race Point Road before the beach) and find out about the area and also the many summer activities offered by the park, on AND off the Cape Cod National Seashore beaches.

Race Point is named for the fierce rip currents that come around the point of the Cape, This portion of the Cape is actually expanding as a result of "long shore" transport of sand from the south, and Race Point has a vast sand beach.

Provincetown has some of the most spectacular sand dunes on Cape Cod. Race Point Lighthouse, which marks the tip of the Cape for passing vessels, is a close walk.

The shoreline at Race Point drops off dramatically, unlike the CCNS beaches further south. Sun worshipers often prefer Race Point since it faces north and gets sun all day long.

Since this is Provincetown after all, expect a lot of same-sex couples and their families at this Cape Cod National Seashore beach. Nudity is common on the north end of the beach so be prepared!

Its calm, warmer waters are ideal for children and swimming. Traditionally the right hand side of the beach is considered more family oriented, while the left is more gay-friendly.

If you want to avoid the crowds walk north towards Hatches Harbor. You may even see whales breaching out at sea, or their water spouts. A lot of picture perfect postcard shots can be taken here at sunset so bring your camera. The sunsets at Herring Cove are unparalleled on the entire Cape, since the sun actually seems to set into the ocean. 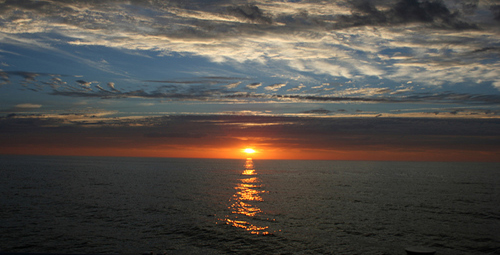 This Cape Cod National Seashore beach has restroom facilities, a concession stand, showers, and lifeguards. Parking is available for $10 per day.

There are two parking areas to the beach. A parking lot to the right, which directly accesses the beach, and a much larger lot to the left. If you park in the farther, larger lot, you will have to trek through a dune path to get to the beach. This end of the beach is wider so it's worth it.